It's been a really eventful couple of weeks and I've been taking a break from blogging - what better way to jump back in then with Thankful Thursday.
The Teen has been busy with baseball. He plays traveling, so we've spent a lot of time on the road lately getting him to his games. It's been so nice to have that alone time in the car with him. This will be his last year, next year will be high school ball. He's come so far since Little League.
We are also getting ready for his big move to his father's house. I really struggled with this for awhile, but I know God is in control and I'm confident that it's the right thing to do.
I did have a scare earlier this week. On Monday afternoon I began having contractions. By that night they were strong enough to wake me up and by Tuesday morning they were come at regular intervals, about 10 per hour. At only 25 weeks it was WAY too early to have this happening. I'm so thankful to have a great OB who was able to get me right in. I was not softened or dilating at all - which was great news. With the Teen I was dilated to 3 1/2 by 28 weeks so I had been very concerned about that. The FFN test was negative, so I was sent home on bedrest. By Tuesday evening the contractions had slowed to only one or two an hour. Yesterday I only had a few contractions, mostly after having been on my feet for a little while. So, it's bedrest for me - but that's OK. I much prefer that to having a micro-premie.
Being on bedrest, I'm very thankful for this: 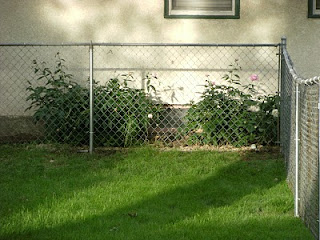 We've had three dogs for over two years, but never had a fence. That meant leashing them and taking them out several times a day. With a baby on the way it seemed like a good idea to spend the money on a fence.
We found one a Craigslist for $80 and hired a couple of college boys to install it. They came yesterday and had it done in one afternoon. 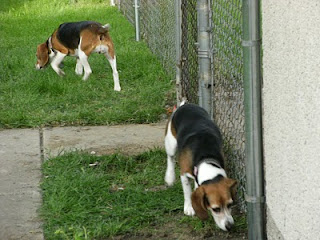 For the first time ever our beagle girls were able to run free in the yard. 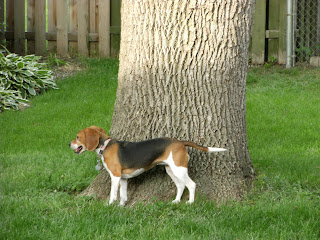 They loved chasing each other and rolling in the grass...and I loved how God provided this inexpensive fence just at the right time. While I knew it was possible I would end up on bedrest sometime this summer He knew how soon it would be.
I'm so thankful for a wonderful husband who has been to kind and supportive and is taking great care of me.
Check out these other great blogs for more Thankful Thursday:
Women Taking a Stand
Welcome to the Nuthouse
Share |
Posted by Jessica Kramasz at 12:37 PM

Your comments are such a blessing to me.

"Let us hold fast the confession of our hope without wavering, for he who promised is faithful. And let us consider how to stir up one another to love and good works, not neglecting to meet together, as is the habit of some, but encouraging one another, and all the more as you see the Day drawing near. " Hebrews 10:23-25