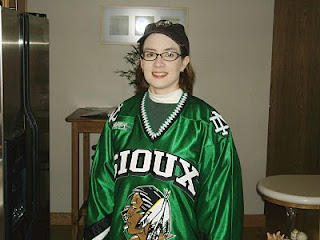 I love having "guy time" with Mr K. Well, almost guy time, seeing as I am not a guy.
If you've been married any amount of time I'm sure you're aware that they are not like us. My idea of a great Friday evening would be a nice dinner alone with him, a romantic walk by the lake, or cuddling by a fire. While the walks by the lake and cuddling by the fire have yet to happen, I do often have dinner alone with him at least once a week. He probably considers that girl time.
So when he wanted to go see the ND Fighting Sioux at the Excel Energy Center last Friday I quickly agreed. It was time for some guy time. He found tickets on Craigslist, we got out our Sioux gear and headed for the arena. 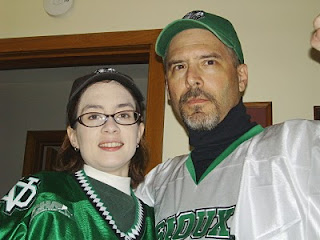 I had never been seen the Sioux play live before - I've watched MANY games with him, and even some without him so I could text him updates when he was unable to watch, but I had never seen one live. 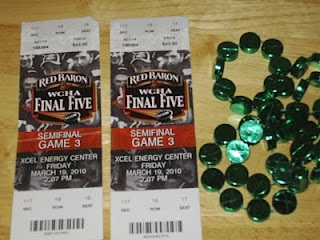 We had great seats right on the blue line behind the ND bench. Mr K was able to get pictures of many of the players during warm-ups. 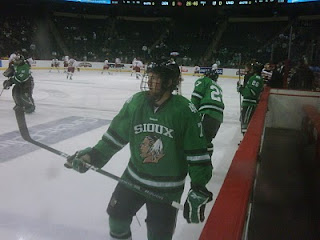 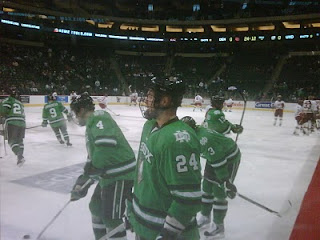 It was great. Not that I'm a huge hockey fan. Being married to Mr K, it's growing on me. But what was great was being a part of something that was important to him.
The most fun part (besides spending time with Mr K)? Everytime the Sioux would score the baby would kick. It was mostly Sioux fans there, so it was loud when they would score. Personally, I think the noise startled the baby, but Mr K swears the baby is already a Sioux fan. Someday, he/she probably will be.
Share |
Posted by Jessica Kramasz at 1:46 PM

Email ThisBlogThis!Share to TwitterShare to FacebookShare to Pinterest
Labels: Marriage

Your comments are such a blessing to me.

"Let us hold fast the confession of our hope without wavering, for he who promised is faithful. And let us consider how to stir up one another to love and good works, not neglecting to meet together, as is the habit of some, but encouraging one another, and all the more as you see the Day drawing near. " Hebrews 10:23-25